It IS graduation season, so how appropriate that I delayed the final installment of Illustration Correspondence Course until now! HA. Like I am that organized. But I figured I should wrap things up, because I gots pictures from Book Expo America to share, I gots a mural I'm working on to share...
SO! Our final virtual class! I'll try not to get teary-eyed. This subject is always a crowd-pleaser, because it's the stuff that everyone REALLY wants to know... HOW TO GET YOUR STUFF PUBLISHED. I used to give this talk quite frequently at SCBWI conferences, and it's a talk I like to call: 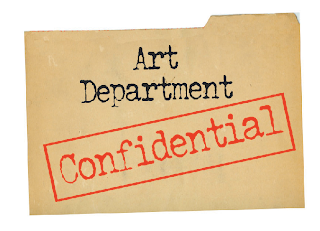 I know as well as the next person that it is important to have a good ice breaker with these types of things. This is my ice breaker (note: I will likely use this ice breaker in my summer course in July- spoiler alert!). I've also showed these pictures on my blog before, but they're JUST SO GOOD I never get tired of them. 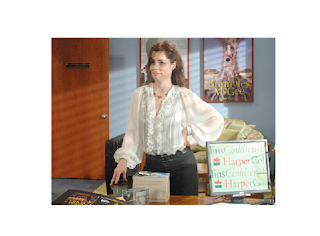 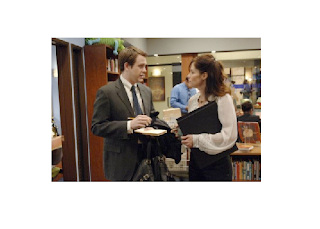 So, these are some scenes from the very short-lived television show The Something Something of Jezebel James, wherein Parker Posey played an editor at HarperCollins Children's Books. These offices look a lot more swank than my "office" when I worked at HarperCollins: 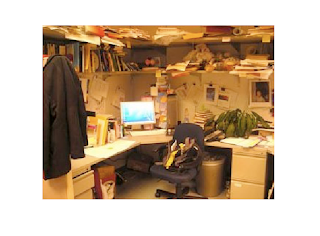 No window, and no frilly blouse for me, I can assure you. 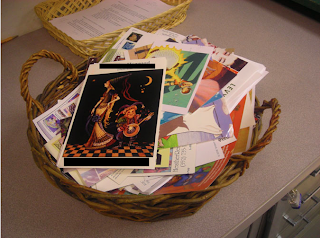 Anyhoo, it was my job as the NKOTB in the design department to sort through the postcards we received from illustrators. I still recommend postcards to participants in my class- they're a relatively cheap way to promote yourself, and no one is annoyed by receiving a postcard.
I highlighted some of the postcards that I discarded immediately: 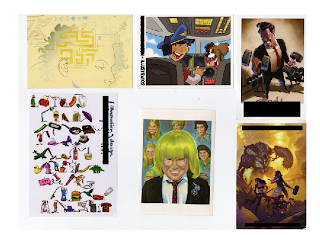 Now, I don't think any of these illustrations are "bad", per se. In a clockwise manner, starting at the top left, I rejected these because they were a) too editorial, b) too "mass market", c) too editorial again (maybe for Money magazine, not for children's books), d) too sci-fi, e) too weird, and f) not telling a narrative story.
In the Yes bin went these postcards. First off, they all show KIDS (or kid-friendly subjects). Big plus! And besides being well-executed, I feel like all of these postcards tell a story, or evoke a narrative. I love the little girl hugging her grandpa, for example- it's such a simple, sweet, and universal moment and feeling. And those birds on a wire! How I love them! I like that many of the birds are angry. Children are often angry (as I can tell you from working at a children's museum), and it's nice to get a hint that this illustrator can represent a wide range of emotions. 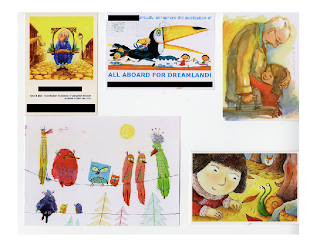 Getting yourself in the "yes" bin does not mean you're going to get an illustration job, however. Oh, not by a long shot. After I pulled out some good postcards, the first thing I did was go to the illustrator's website or blog. No online portfolio= postcard goes into the recycling bin. It sounds harsh, but it really makes it so, so much easier to share your work with the publishing team if you have an online presence.
If the illustrator had a website with lots of cute illustrations appropriate for children's books, I'd print a few of my favorites and put them in a filing folder. If I REALLY liked the illustrator, I'd send a link around to some of the editorial & art deptartment members.
Matching illustrators from these files to projects at hand could be a very difficult process, and a decision that most definitely was not left up to me. It was a decision reached by editorial, art, the publisher, and in some cases, sales, marketing, & the author. As a new illustrator, sometimes the cards are stacked against you. If the manuscript at hand is by a new author, the publisher likely won't pick a new illustrator to go with it. Either one or the other usually has some sort of track record & following. That's why I say- and I'm sticking to it!!- that it MAY be easier to get published if you write and illustrate your own books! I've heard others say different things... but I know that I saw many, many talented illustrators that I LOVED, and the chances of finding exactly the right manuscript at the right time, with the right subject matter and approved by the right people... well, it's a lot of hoops to jump through to become "the one".
And on that note! Well, that sounded like a real downer of an ending. I totally didn't mean it that way, and what's more, I don't think illustration in general has a downer of an ending! Sure, it can take a really, really, really, REALLY long time to get published, but it CAN and DOES happen! All the time. I cannot recommend highly enough the Society of Children's Book Writers and Illustrators (SCBWI). They are an international organization and real-life resource to learn the ins and outs of writing, illustrating, and publishing.
Whew! Thanks for sticking around for the end of class! At my dad's great suggestion, I have a little something for you for completing this course: 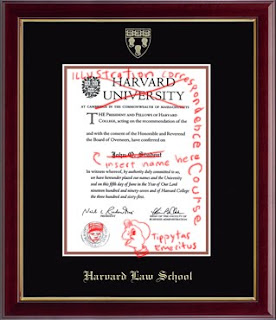 I'm framing mine- it's going right next to the "Mousters" degree I earned from working at Disney World one summer. I chose not to pursue my Ducktorate that year.
Posted by Vicki at 9:36 PM

I really enjoyed taking your class! Still can't understand what is going on with Oliver and that green hair...

This is really a good article on how to get noticed and someday get published. A real eye opener! definitely retweeting this one!

I didn't get much out of a year's subscription to SCWBI but I did get a lot out of your post. I illustrate in a large variety of styles and mediums. One postcard will not capture my capabilites. The website does. I expected people to check out my site upon receiving a postcard but now I see there's decisions made before a website is seen... Which means to me I have to print out a bunch of different postcards to show people the variety of my styles.

Thanks! And Alex, sorry that you didn't get much out of your SCBWI year- did you attend any of the conferences? I feel like that's one of the big highlights of the group. It's a good time to mingle with authors/illustrators in your community, and to hear words of wisdom from editors, agents, art directors, etc.

I should have mentioned- tear sheets are another option if you feel that one postcard isn't sufficient to display your work. The problems with tear sheets are 1) more money (to make and to mail), and b) I, at least, always got somewhat annoyed with tear sheets because it was an extra envelope to open. Sounds lazy, but when I was going through a basket of postcards on my lunch break, it didn't take much to set me off.

I actually think it's a really good idea to print off a few different postcards. You can send them off every few months & keep your work fresh in publishers' minds, and you never know which image might strike a chord or fill a void for a certain editor/art director.

Hi! This is a great article! Very timely for me since I am working on my postcard right now. I've heard the phrase "too mass-market" before, but I'm not really sure what that means in regards to illustration style. Could you explain it a little more?

Yes, mass market can be tricky to define, and can also be subjective. For me, if something looks "mass market", I could see it as a Saturday morning cartoon, or a cereal commercial, or something. Dora the Explorer, for example, as compared to Where the Wild Things Are. There's a whole spectrum of books that fall somewhere in between those two examples and it's up to the illustrator, and the publisher, to decide how commercial is TOO commercial.

This is a very helpful post! Thank you so much!!!!

I love your work. Thanks for being generous and transparent about sharing your insights, experience and such...it makes it all so much more tangible and possible.

Cheers to your future successes and blogs.

I'm glad you posted this. I remember when you did this presentation at the conference here in Utah and I've wished I could sometimes go back and look at your visuals. :)

Great post .... I have had success with postcard mailouts and it is the emotional connection that seems to work for me! Thanks Victoria. 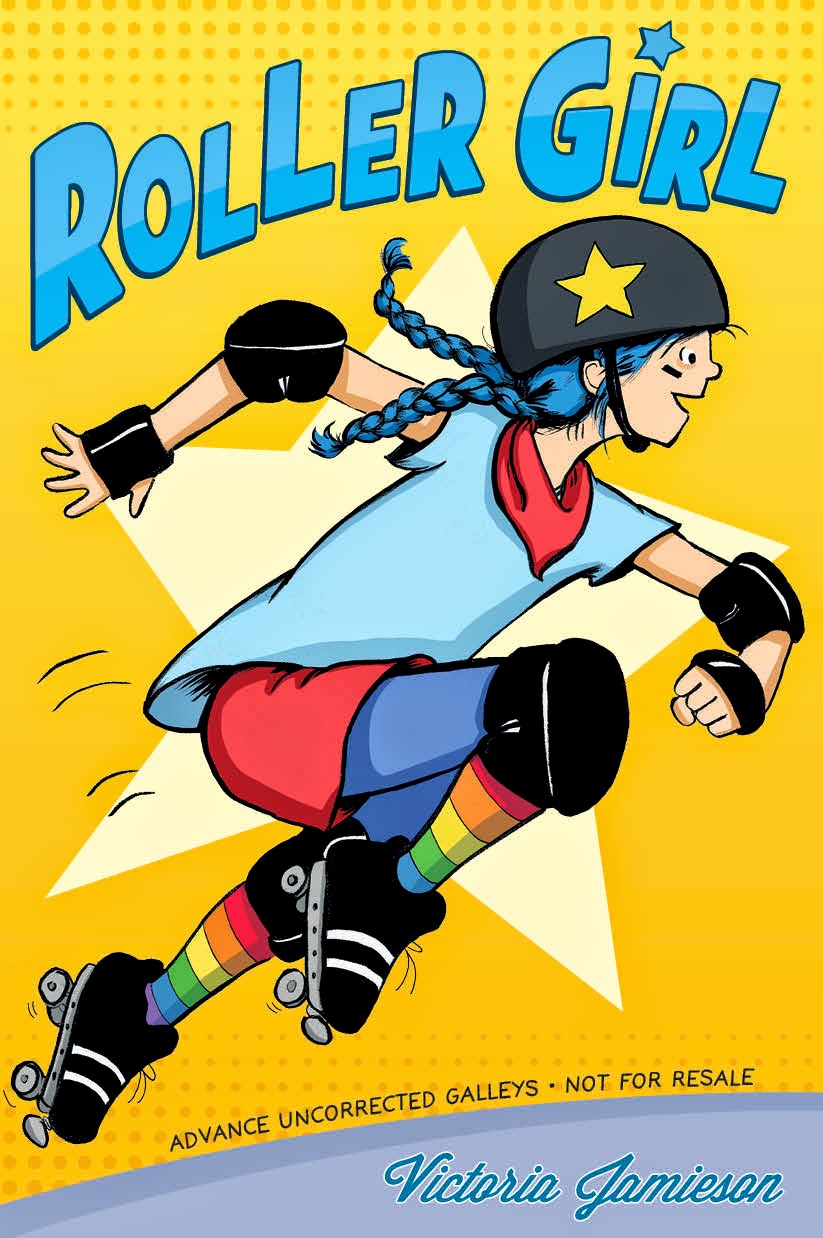 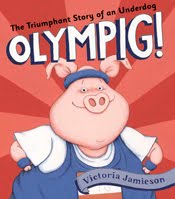 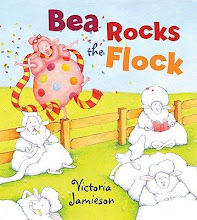